This trail takes us to places in the interior of WA that not many people travel. We start the day on a well-­travelled path though Start by driving east on Great Eastern Highway; the artery that connects Western Australia to the rest of the nation.

At the turn of the century, this was one of many tracks that led miners out to Kalgoorlie, 500 kilometres away, to chase their fortune. Built with convict labour around 1867, the highway's original road base was made of jarrah tree trunks cut into disc shapes. The wooden discs were the idea of the governor, John Hampton and they came to be known as 'Hampton's Cheeses'. Thankfully now, there is something more substantial than Hamptons Cheeses holding up you, and the more than 1000 cars and 500 trucks that use the highway each day.

The first town we pass through, Meckering, is just 35 kilometres up the road. Although the first block of land was awarded back in 1849 near a spring named Koolbunine, about seven kilometers south of the main townsite, it wasn't until the railway came through in 1895 that Meckering was selected for a station. 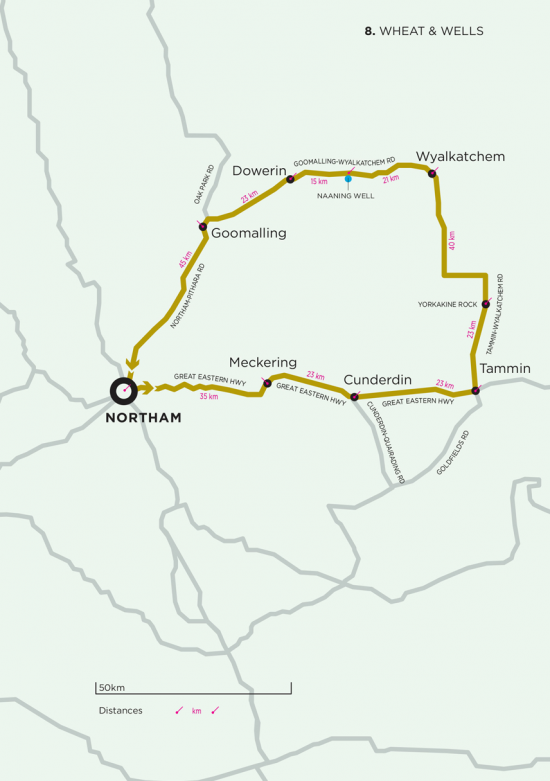 Originally named Beebering, the name was changed to Meckering two years later. Within six years the town was home to a railway station, three stores, a blacksmith, a hotel, a town hall, school, banks and a post office. When the water supply from the Goldfields Pipeline reached in 1903, a cordial factory was established that supplied drinks across the state until the 1950's. It is hard to match that picture of Meckering - the one with a population in the hundreds and a busy main street lined with two story buildings - with the 'blink and you'll miss it' little roadside stop that you see now.

The Meckering earthquake was the third largest seismic event in Australia's history and the only big one to hit a populated area. It took less than a minute to shake the town to rubble. Meckering never recovered to the same size afterwards. You can read more about the Meckering Earthquake, including tips on places nearby to relive this cataclysmic event, in Trail One of this book - The Day The Earth Shook. 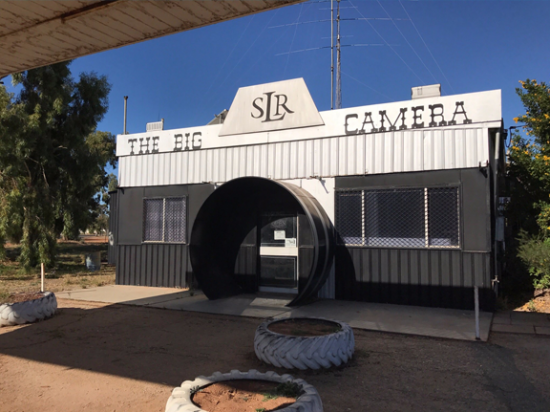 Then, before you leave Meckering, we've got a treasure hunt for you. If you had the Southern Hemispheres largest privately owned camera collection, where would you keep it? Maybe the building that looks like a big camera? As with all the museums we see today, the Meckering Camera Museum is run by a volunteer, so opening hours may vary. If you get a chance to see inside though, prepare to be amazed.

In 1932, Meckering had two grain elevators installed by the Wheat Pool of Western Australia at the railway siding. They were much smaller than the huge grain receival bins that you see today. You will see different versions of these throughout the rest of our journey.

Agricultural production in the early days of the European colonization of Australia wasn't about export income - it was about survival. The challenge was to produce enough to feed the growing population. Wheat was one of the first crops planted and it became the colony's most important grain. However Black Stem Rust decimated local crops in the second half of the 19th century. In 1889, Australia's crop was one of its worst in history, and flour-millers had to import wheat This was the year that William Farrer, borrowing his wife's hairpins to handle the fine grains of pollen, began his experiments in the cross pollination of wheat They were some of the first plant hybridisation experiments in the world. After much trial and error, he was able to produce a wheat that was sufficiently tough for the Australian climate, rust resistant and yet soft enough to suit the flour millers. He combined an Indian wheat with Purple Straw from Europe and Canadian Fife. He called his new creation 'Federation' and it is the great grandparent of most Australian wheat varieties. Breeding technology is now so sophisticated that there are strains to suit almost every microclimate. Modern breeds have names like 'Rock Star' and 'Vixen'. There's even a variety called 'Wyalkatchem', which is one of the stops on our trail.

We continue a further 23 kilometres east on Great Eastern Highway to Cunderdin. Here you will find, in the Cunderdin Museum, an open-air illustration of the other development that made wheat growing viable in Western Australia - mechanisation. They have tractors and farm machinery from the very earliest days of the Wheatbelt Technology that started with the Ridley Stripper, the Stump-Jump Plough and the Disc Plough to make working the land easier. Then following World War One, the first tractors towing harvesters that have evolved to the giant multi-million dollar, GPS controlled behemoths that rumble through the paddocks now. Wheat continues to make up 65% of Australia's grain production. $2-3 Billion is generated annually for the Western Australian economy and our state produces half of the nation's crop. The Cunderdin Museum is housed in the old No:3 Pump Station for the Goldfields Pipeline, which played a crucial part in the growth of the wheatbelt.

Conditions around Kalgoorlie and Coolgardie in the late 19th century were both extreme and desperate. The pitiful amount of water available in the soaks and muddy wells was being fought over by a growing band of fortune seekers who were making the trek east in their thousands. Disease was spreading because of poor quality water.

The Goldfields had the potential to make many Western Australians rich, if conditions could be made more liveable. The bold decision was taken to pipe water from a dam on the Helena River 530 kilometres to Kalgoorlie. It took four years, cost the equivalent of the colony's entire budget for a year and took the life of its main architect, CY O'Connor. But the scheme worked and continues to guarantee water supply to 100,000 people spread over more than 100,000 square kilometres. A less anticipated side-benefit of the Golden Pipeline was how it brought water to many Wheatbelt towns and let them grow. Like Goomalling, Dowerin, Wyalkatchem, and Tammin, where our journey leads next.

Tammin was one of the many areas first travelled by Charles Hunt in his expeditions that linked the 23 waterholes from York to Coolgardie; making the track that was to be followed by the first gold prospectors. The town is named after Tamm in Rock which, like many of the granite monoliths dotting the Wheatbelt, was a crucial source of water for the Ballardong and Njakinjaki people who roamed this land without flowing rivers.

Most of the Wheatbelt's rocks are places of great spiritual and cultural significance to the people who were here tens of thousands of years before colonisation. The large granite domes, called lsenbergs, act as natural water catchments. The water that collects in rock crevices and that soaks into the nearby soil allows for plant growth that attracts more animals; making an abundant food supply. We travel to such a place next. 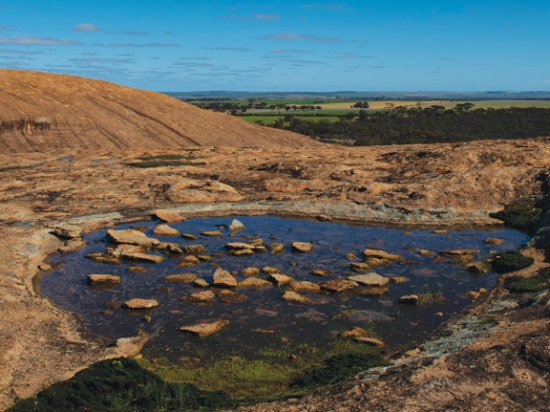 25 kilometres north of Tamm in on the Tammin Wyalkatchem Road you'll find Yorkrakine Rock Nature Reserve. 341 metres high and covering 160 hectares, Yorkrakine is surrounded by remnant York Gum and Jam Acacia woodland. If you feel something at Yorkrakine that you can't quite describe, then you won't be the first. This is a very special location. Yorkrakine was a birthing place for the Nyoongar people and as such is one of their most sacred sites. The women would gather and support the mother during childbirth, tending a fire and covering the baby in lukewarm ashes after it was born; starting the first ritual in a life guided by ceremony.

On our way to Wyalkatchem, a further 31 kilometres up the road, we pass the turn to Korrelocking. It was here that Mr Harry Threlffal loaded the first bulk grain in Western Australia on the 9th of November 1931. Wyalkatchem itself was one of the first 5 towns to receive a bulk wheat handing terminal in the state. In Wyalkatchem you'll find another one of the amazing museums that run on community spirit. In the Heritage Railway Site on the main street, the museum building is a 1936 'K' type wheat bin which is believed to be the oldest in preservation. In 'Vern's Shed', 'Kevin's Shed', and the wheat bin, there's a huge collection of artifacts, all manner of agricultural machinery from every age and military displays. If the old cars in Vern's shed look like they've just been wheeled in from the back of some farm where they've been under a tarp for 70-years - that's probably because they have. There is also a collection of photographs that are moving in their depiction of life in those hard post Federation and Depression years. The folk who run the Wyalkatchem CBH & Agricultural Museum care about preserving the legacy of Wheatbelt life and it shows.

Like every other significant place in the Wheatbelt. Wyalkatchem owes its existence to a water source. The well at Wyalkatchem, which was enlarged and given square sides in 1881 to become Wyalkatchem Tank, was on the road from Toodyay to the Yilgarn Goldfield. The original well can still be found on the Wyalkatchem Golf Course. On our way home towards Dowerin and Goomalling, we pass by Naaning Well, a crucial stopping point for prospectors trekking out to the goldfields from Goomalling. Our next town, Dowerin, was once the motor racing capital of Western Australia before the Second World War which gives some idea of how much these sleepy Wheatbelt towns used to thrive. The town is now home to the Dowerin Field Days, held in the last week of August. In 1965 the Dowerin Progress Association were afraid their town would become a ghost town. Their little initiative has grown to become the biggest agricultural show in the state. 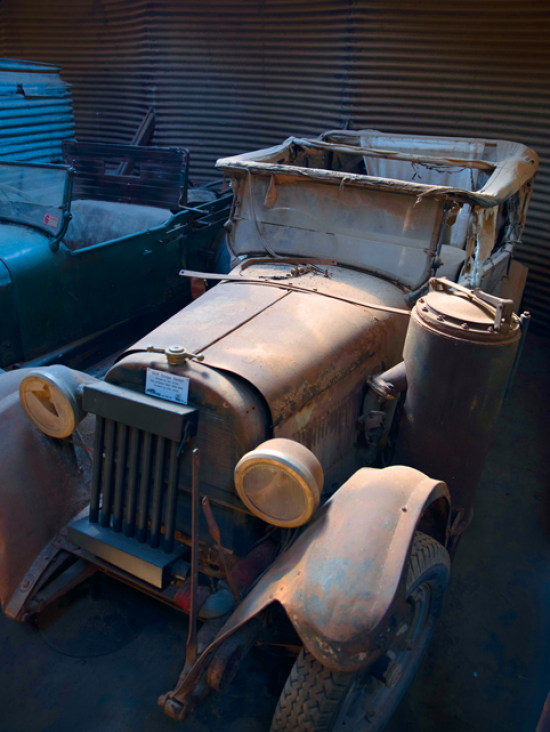 We head home via Goomalling. Just out of town we pass by the preserved homestead of the first settler in the Goomalling region, George Slater, who had established a property around Goomalling Spring in the 1850's. The original train station that gave the town its life in the 1900's can be seen on the main street and little further along Railway Terrace, you can see Goomalling's unique grain silos.

The only ones of their kind in the Southern Hemisphere, the concrete domes are capable of storing 44,000 tonnes of grain. The locals call them 'The Dolly Twins'. From Goomalling it's a 45-kilometre run along the Goomalling Northan Road to Northam and the Farmers' Home Hotel.