Northam's first settler, John Morrell, had been a builder in London. His skill as a craftsman is evident in the durability, of the oldest building in Northam and one of Western Australia's oldest surviving residences - Morby Cottage.

After leaving the Farmers' Home we turn right from Minson Avenue onto Peel Terrace, then left again into Fitzgerald Street East. Not long after crossing the Mortlock River, we turn left into Katrine Road. It's now 800 metres to the cottage and we are following the same track that Morrell would have cut to reach his land grant in 1836. The house was built with local stone and mud but had doors and window frames that were transported from England.

Exactly why Morrell left London with his family isn't clear, but we might assume the same reason that drove the many thousands of migrants who followed him - for a better life. 1830's London was an overcrowded city with poor sanitation. Typhoid and Cholera were rife. Less than half the children born lived past age 5. Also, following the Napoleonic wars, much of Europe was in upheaval as old power structures gave way to new. Uncertainty and disruption are bad for business. Morrell was influenced by newspaper reports of how 'well adapted for agricultural purposes' the new Swan River Colony was. Less than a year after writing an inquiry to the government about the potential of land grants, Morell dissolved his business, auctioned his properties, paid his creditors and set sail.

Morby Cottage became the centre of life in old Northam. The first mill in the district was on the property, as was the first church and school. The Morrells planted vines, trees and potatoes and produced good quality cheese and butter. Morrell also spent time in Perth, constructing early buildings.

Morrell dived into the Avon River to save one of his workers from drowning, contracted pneumonia and died. He was buried at the top of Doctor's Hill. 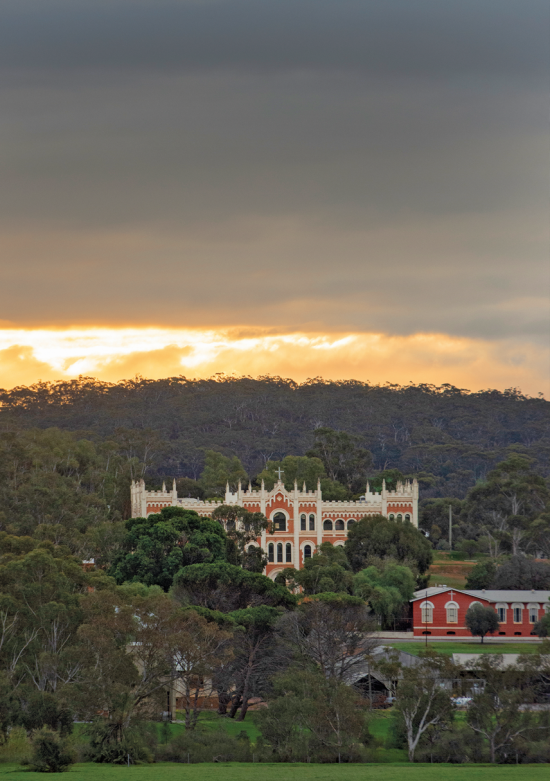 Morby Cottage is now under the care of the Morby Cottage Management Committee. The cottage can be seen easily from the side of the road. It still has many the Morrell family heirlooms inside, but public viewing hours are limited. Instructions about opening hours are on the sign.

After leaving New Northam and passing by Old Northam, we continue on Katrine Road, ignoring the left turn and staying on the road as it becomes Irishtown Road. After passing under Great Eastern Highway, in 17 kilometres we cross the Goomalling Toodyay Road onto Bejoording Road. In another 18 kilometres we meet the Bindi Bindi Toodyay Road, turn right, and follow it 14 kilometres to Bolgart. In Bolgart, we meet the character who plays a central role in the next part of our journey.

On 11 July 1844 Dom Rosendo Salvado and his fellow Benedictine Monk, Dom Joseph Serra were returning from their usual stroll in the woods near the Monastery of Cava, Italy. They too, had been impacted by the turmoil in Europe and were in exile from their native Spain. They spoke of their plans to devote themselves to foreign missions.

"There is something really magnificent about these missions", said Dom Serra. "There is nothing finer a man may do. But on the other hand ... " As his voice trailed off, Dom Salvado sensed that his companion was baulking at the many hardships such missions faced. "Would you be prepared to go if I went with you?" Dom Salvado asked. "If you can face it. I can too" Dom Serra replied.

A year and a half later after 113 gruelling days at sea, the two friends kneeled on the sand at Fremantle with 28 other missionaries. They sang Te Deum (We praise God) and, along with many of the crowd that had gathered, wept. A month later they set out into the unknown: Dom Salvado, Dom Serra, French Benedictine novice Dom Léandre Fonteinne and an Irish catechist, John Gorman. Many of the crowd gathered to farewell them in Perth expected to never see them again.

The party stopped at Bolgart on their way to camping at Badji Badji. Near Bolgart we are leaving Ballardong Nyoongar country and crossing into Yued (or Yuat) land. It was a Yued man who saved the missionaries as they trekked north-west on the sandy Victoria Plains; leading them to a waterhole just as they were about to expire from thirst.

If you are planning to break up the drive to New Norcia, we suggest Bolgart as a place to stretch your legs. The locals built a Bell Tower as a humorous protest over government spending on such monuments as the Perth Bell Tower. They even convinced the Premier of the day to officially open it in 1999.

We pass through Calingiri as the trail gradually bends west to join with the Great Northern Highway. Not far along the highway, as you look west, you will see the improbable sight of church steeples and gothic looking Spanish architecture rising out of the bush and surrounding paddocks. From the viewing point on the highway, Australia's only monastic town will spread before you. The incongruous sight of these buildings speaks of the devotion and determination of its founders, however misguided it may seem, to spread their word among the Nyoongar people.

The early years of the New Norcia monastery were harsh. Food was scarce and so was water during the dry seasons. Dom Léandre Fonteinne accidentally shot John Gorman dead while hunting. Unable to overcome his grief, he departed the mission, leaving the two friends to continue. On one of his trips to Perth for supplies, Dom Salvado found the bishop had none to spare. A talented and trained musician, he organised and sold tickets for a fundraising recital. The monk played to a crowd of several hundred in the courthouse, his tunic almost in rags from months in the bush. "Add to this a big unkempt beard, a face like a charcoal burner and the hands of a smith. I was an object worthy of compassion and of mockery. However, universal applause welcomed me and gave me a little courage."

On a hot mid-December day in 1848, an easterly wind drove a bushfire towards the mission, threatening the crops and small cluster of buildings that had been established. After fighting the fire for hours the situation seemed hopeless. The monks took their picture of Our Lady of Good Counsel from the chapel and placed it against the sheaves of corn. The sea breeze chose that exact moment to turn up and blow the fire back onto itself, saving the mission. According to Dom Salvado's memoirs, a local Yued man commented afterwards, saying something like, "That white lady knows her stuff." 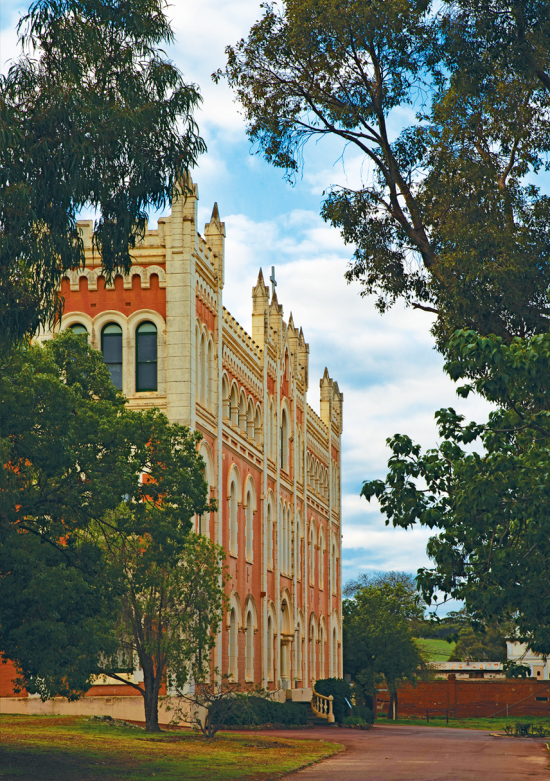 Dom Salvado was to guide the Monastic community at New Norcia for the next 50 years. When he died during a trip to Rome in 1900, the local Yued people wailed for three days.

As you might expect from a Monastic town, New Norcia is a place of peace and contemplation. You will be rewarded from taking your time to stroll around. The town that was home to eighty monks in the monastery and hundreds of children in the colleges now has barely a dozen monks. Some say that they have seen ghosts, though we can't confirm that. The combination of tranquillity, occasional sounds of the Aussie bush and the almost intimidating grandiosity of the large buildings do all seem to speak a silent story of the devotion, tragedy and reverence of mission life. The visitors centre, museum and art gallery should be your starting point. We recommend their tours if you want to learn more about the rich and unique history of this place.

On the return journey, we drive south on Great Northern Highway, taking one last look at the cross of the Abbey Church and the spires of the colleges on the hill as we drive south. At Bindoon we drive east on the Bindoon Dewars Pool Road, become enveloped in the Julimar State Forrest and head towards Toodyay.

Our last stop for the day is the town of Toodyay. Along with York to the south, Toodyay is one of the oldest settled inland towns in Western Australia. Originally named Newcastle, Toodyay reverted to its original name in 1910 to avoid confusion with the town in New South Wales. There has been some debate over the origin of the name, but the consensus among the Ballardong people is from the idea that every bird calls its name. The name 'Duidgee' after the call of the small messenger birds found along the river, is preserved in the riverside recreation area of Duidgee Park. Like York, Toodyay has held much of its original architecture and to simply wander down the main street is to step back in time.

If you want to dig deeper there is an excellent visitor centre behind the old Mill on the main street. Over the railway line on the south side of town you'll find the Newcastle jail precinct. The jail has interactive displays in each cell that immerse you in settlement history and the great wars as well as a moving re-telling of the story of the Ballardong people and their plight after European settlement.

Then, as we follow the Avon River back to Northam, look for Viveash Reserve at the corner where Katrine Road meets the Northam Toodyay Road. It is a peaceful place to watch a quiet bend in the river and observe some of the bird life. Who knows? You may even hear the call of a Duidgee.